The Passion of Joan of Arc: Vox Humana Chamber Choir

The Farquhar at UVic

The Passion of Joan of Arc: Vox Humana Chamber Choir

The Farquhar at UVic (All Ages)

Choral from Victoria BC
Unknown

Choral from Victoria BC
Unknown

"You cannot know the history of silent film unless you know the face of Renée Jeanne Falconetti. In a medium without words, where the filmmakers believed that the camera captured the essence of characters through their faces, to see Falconetti in Dreyer's "The Passion of Joan of Arc” is to look into eyes that will never leave you." Roger Ebert

Ebert reviewed the 1928 film, directed by Danish filmmaker Carl Theodor Dreyer, for its release in The Criterion Collection, an archive of approximately 1000 movies of significance in film history. More than 90 years after its initial release, "The Passion of Joan of Arc" is still considered one of the most innovative films of its time. Instead of a screenplay based on the events, Dreyer used the actual documentation of Joan of Arc's 1431 trial as his starting point. The use of lighting, camera angles, an enormous set, and even the fact that for the first time actors wore no makeup on screen all contribute to making the film an intense, intimate, and otherworldly experience. The French director Jean Cocteau famously said it played like "an historical document from an era in which the cinema didn't exist”.

In 1928, film soundtracks as we know them today did not exist, either. Films were accompanied by live music until synchronized soundtracks became standard in the late 1920s, making "The Passion of Joan of Arc" one of the last great "silent" films. A score for the original release of Dreyer's film was written by French composers Leo Pouget and Victor Alix, however, their score was for an abridged and censored version of the film; apparently the church, the government, and French nationalists all had issues with both Dreyer's vision of the subject and his nationality as a Danish citizen. To make matters worse, Dreyer's original cut of the film and his working material were destroyed by fire - something that has always plagued early films, which are highly flammable - and was thought lost to history.

Miraculously, a print of Dreyer's original cut of "The Passion" was found in a Norwegian hospital in 1981. It is not entirely known how it got there; it is suspected that a doctor at that hospital had both an interest in the subject of Joan of Arc, and a connection to Dreyer. At any rate, it was a spectacular find, and it is this version that made its way into The Criterion Collection.

In 1994, American composer Richard Einhorn was inspired to compose a piece to accompany Dreyer's cut of the film. He called his piece an "oratorio" and give it the title "Voices of Light". It is scored for a semi-chorus of female voices (originally recorded by the early music ensemble Anonymous 4), a full mixed choir, and a small orchestra of strings and winds, that includes solo parts for viola da gamba. The piece made a powerful impact on audiences and critics alike, so much so that the curators of The Criterion Collection decided to include Einhorn's work as a soundtrack option on the film's DVD release.

Vox Humana is proud to present the Victoria premiere of the silent film The Passion of Joan of Arc, projected on large screen, accompanied by the live soundtrack Voices of Light by Richard Einhorn, and featuring choir and orchestra.

The Farquhar at UVic 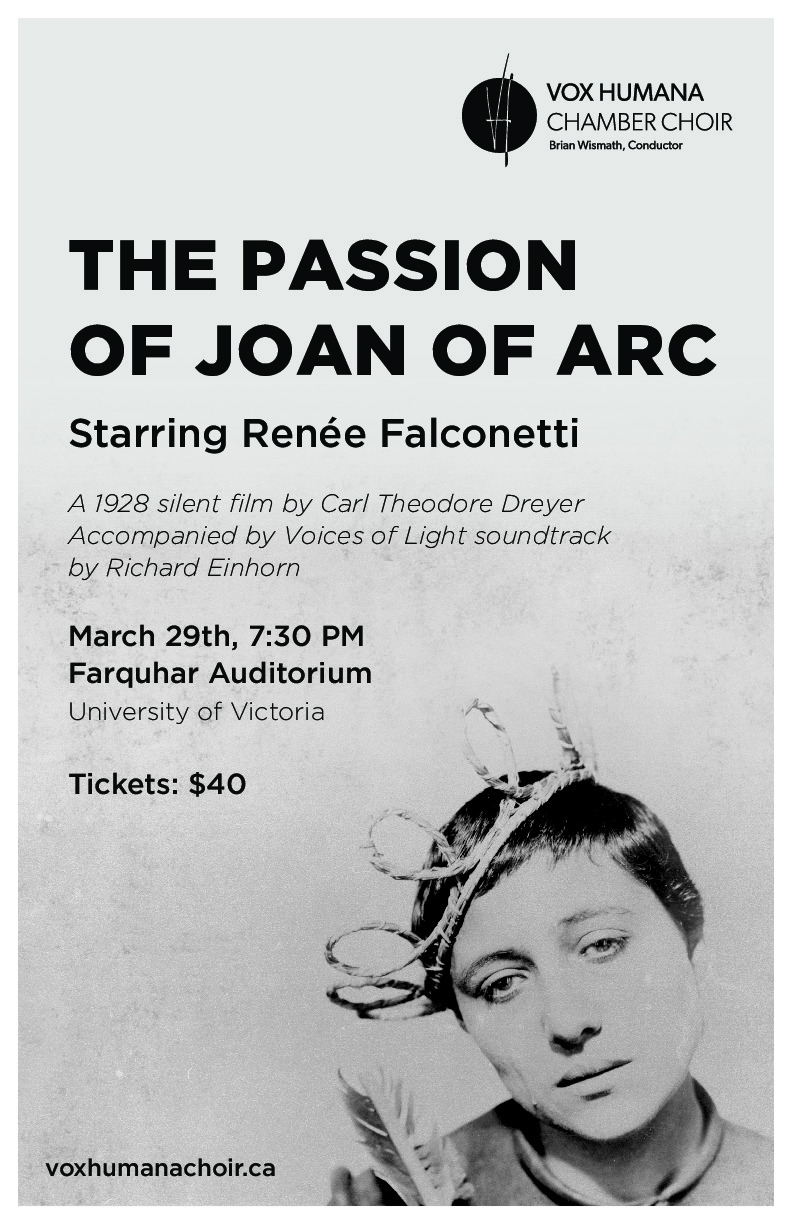