HILLTOP HOODS: INTO THE GREAT EXPANSE

The legacy of the Hilltop Hoods is already undeniable. They helped create hip hop as a local genre in Australia.

‘1955’ and ‘Cosby Sweater’ reached the top five in the ARIA charts and have both reached six-times platinum status. The smash ‘I Love It’ went five-times platinum. They opened the door for countless acts from all over Australia through their mentoring, touring and their annual Initiative for emerging acts.

Every studio album from 2006’s The Hard Road onwards has debuted at number one - they even picked up a number one debut for their recent Remix album (Drinking From The Sun Walking Under Stars Restrung). They’ve consistently racked up multi-platinum sales in an era when the industry is seeing sales dwindle across the board. They’ve also been a consistent and powerful live act throughout Australia, Canada and Europe, and even took hip hop back to its birthplace in the US.

After finishing their very first sold out Arena Tour in 2016 and supporting Eminem across Australia and New Zealand in February 2019, what do Hilltop Hoods do next?

The answer is The Great Expanse.

“We never stop writing,” nods Suffa, Matt Lambert. “We did have a conversation where we were like ‘let’s just write as hard as we can and go over the top’.”

“We definitely push ourselves creatively more with every record,” explains Pressure, aka Daniel Smith.

And that time was well spent.

“We wrote most of it over a two year period, but some of the ideas were even older - like, a hook or a verse here or there. We pulled back on the touring a lot, just the odd festival slot or a month overseas.”

With album number eight the trio have created another statement of intent. And if anyone was thinking that things would be slowing down at this point then you're in for a shock.

"I feel like the first two thirds of the record are more upbeat than anything we've ever done before," Pressure declares.

"That was deliberate," Suffa confirms, "When we were working on the tracklisting we were like 'how do we make this make sense, because there was so much light and shade."

And he’s not wrong. After the curtain-up prelude of the title track it slams into the euphoric opener ‘Into The Abyss’ and the riff heavy hit 'Leave Me Lonely' - released mere weeks before Hottest 100 voting closed, it still reached #24 in Triple J's mighty music democracy and became a platinum accredited commercial radio crossover hit (number one most added to radio in Australia on release.)

‘The Great Expanse’ is an album filled with an eclectic group of guests including Ecca Vandal (who lends her vocals to 'Exit Sign' and 'Be Yourself'), Adrian Eagle (who soulfully delivers the hook on 'Clark Griswold'), Ruel (who shines on one of the albums more contemplative tracks 'Fire & Grace'), Timberwolf (crashing through with a powerful and emotive performance on 'Sell It All, Run Away') and Nyssa (a brand new talent who appears on both ‘Be Yourself’ and 'Here Without You’) as well as an appearance from the Hoods close friend and ally, Illy.

Even with these new flavours, the sound is unmistakably Hoods.

If anything, The Great Expanse is exactly what its title suggests: a life gone widescreen. There's pride. There's joy. There's doubt. And there's deep-cut, at times obscure references: what other crew would use the chorus of ‘Ooft’ to shout out little known Star Wars character, Ponda Baba?

On the production side of things, the Hoods have enlisted old friends like One Above, Trials, Cam Bluff and Plutonic Lab, as well as SIXFOUR who helmed last year's ARIA Award winning single 'Clark Griswold'. That song, a tongue in cheek tribute to the pleasures and pitfalls of fatherhood, was an early reminder that there's an entire generation who grew up with the band - even though the people that voted it into the Hottest 100 probably aren't contemplating a travel plan, much less a caravan.

"But I don't think in context you have to having the exact same experience as the person you're listening to," Suffa points out. "I listen to Jay-Z records that are about how he could have bought 20 million dollars worth of property in New York and turned it into 200 million in five years and believe me, I can't relate to that, but I still enjoy the record.”

"Our model has always been the Beastie Boys: they always released Beastie Boys tracks. Whether it was the early 90s, late 90s, mid-2000s, whatever, it sounded like them. But it didn't ever sound like they repeated themselves."

And that’s the beauty of The Great Expanse. In this endless cosmos, the Hilltop Hoods have created their own grand universe. 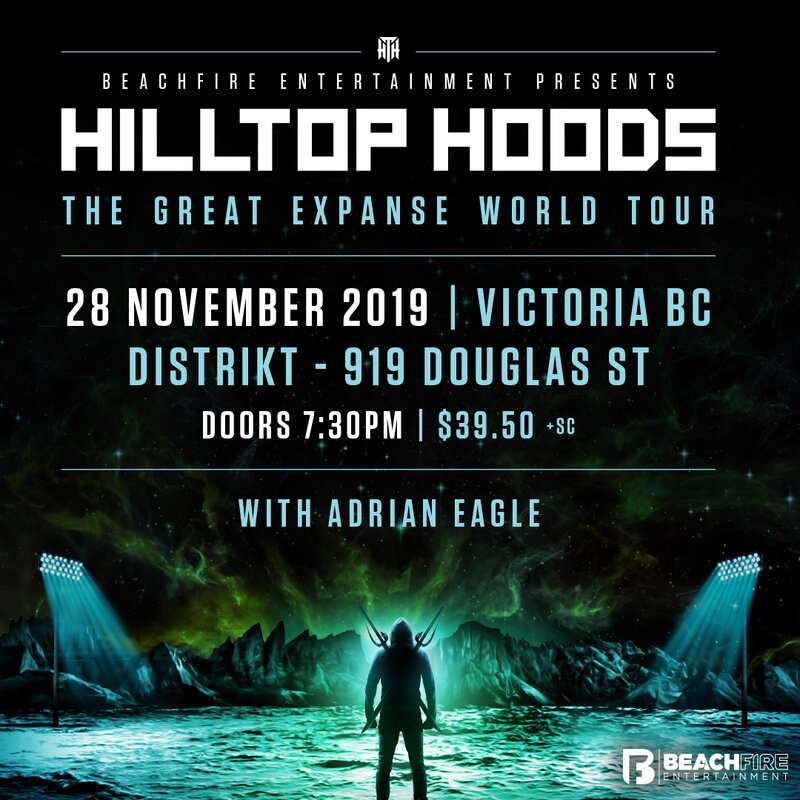