The Astoria Vancouver BC

The Astoria (No Minors)

The Invisible Orange is a Vancouver BC concert promotion and...
Vancouver BC
Open / Operational

EVENT DETAILS
The most underrated death metal band to rise from the sands of Mexico Evil Heart travel to Canada to unleash their assaulting fiesta at The Astoria on October 15. Unbeheld and Truent spice up the night with their deadly west coast flair at the not so family oriented affair. Appropriate attire: Band t-shirt, black jeans and sombreros paired with corpse paint are definitely welcome.

EVIL HEART was formed in 1999 in Culiacan, Sinaloa, Mexico. On July 13, 2001 the band released its first demo “Summoned To War.” In 2003 after major lineup changes the band recorded its first album “Dark In Glory” which was released on May 3, 2004. In the next few years Evilheart shared the stage with international acts like Dimmu Borgir, Amon Amarth, Deicide, Malevolent Creation, Asesino, Cellador, Behemoth and Sothis, as well with recognized Mexican bands like Hacavitz, Sarcoma, Solitude, BlackTorment, and Disgorge.

UNBEHELD are a Death Metal band from the west coast of Canada. They came into existence slowly throughout the course of 2014 which ended with them releasing their debut self titled EP. A relentless onslaught of cacophonus riffs, gutteral vocals, and fast drumming.

TRUENT Loud music your mom will hate from Maple Ridge, BC, Canada.

VOMITSELF is a blend of vicious doom and sludge metal, coloured by influences of post-metal, noise, drone, black metal, old school death metal, and crust punk, their sound covers a wide range of frequencies and tempos. Although most of their rehearsals devolve into harsh noise and drone, once in awhile, a song emerges out of the cacophony.

SUBSCRIBE to The Invisible Orange Newsletter and never miss an update. 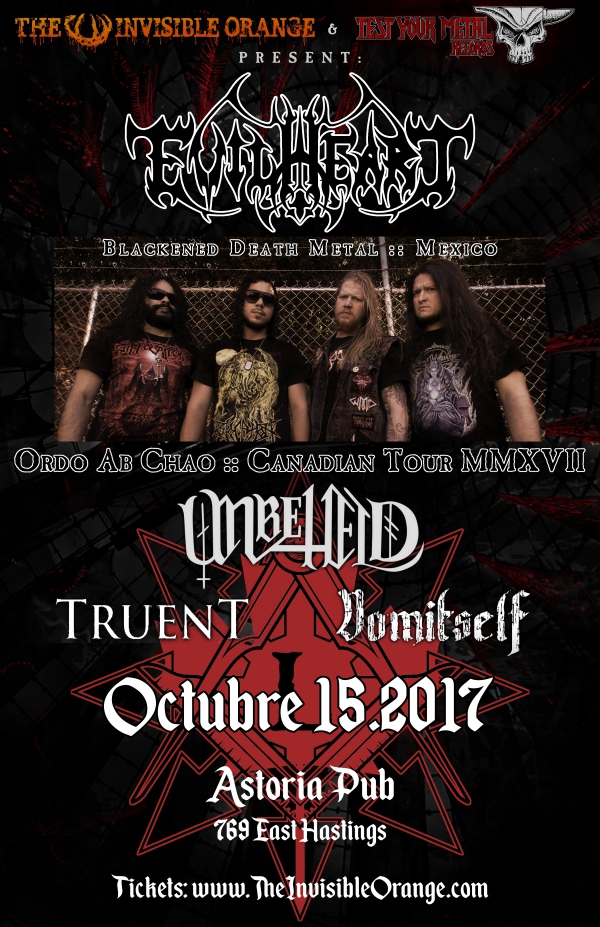