737 Productions is proud to present the Victoria stop on The Real McKenzies 25th...

Celtic Punk from Vancouver BC
Available for Shows/Gigs

Opening up this show will be their Stomp Records label mates Isotopes Punk Rock Baseball Club who will also be debuting their new album, and Vancouver fan favourites ATD.

It I can be said, without any exaggeration, that The Real McKenzies are a national treasure.
Founded in 1992 by the larger than life, punkrock poet laureate, Mr Paul McKenzie, this merry band of miscreants has spent a quarter century circumnavigating the globe to bring the McKenzies gospel to an ever-adoring throng of rebels, scallywags and ne’er do wells. There are not many bands that can boast of a twenty five year career as staggeringly adventurous, wildly tempestuous and utterly death-defying as The Real McKenzies. It would be a serious mistake to write them off as just another Celtic punk band. They are an unstoppable juggernaut of touring mayhem. A ferocious troupe of insanely talented minstrels, storytellers and entertainers melding traditional acoustic and electric to create a sound like no other. Their list of accolades is long. From sharing the stage with the likes of NOFX, Rancid, Flogging Molly, Metallica and Shane McGowan to appearing in film, books and video games to signing with the legendary Fat Wreck Chords, their story continues to astound.

And now, to celebrate their landmark twenty-fifth anniversary, The Real McKenzies return with their 10th and very best long-player to date. And that’s not hyperbole. This is an absolutely monumental giant of an album. "Two Devils Will Talk" is fourteen tracks of pure, unbridled audio bliss. The songs are rebellious, poignant and achingly heartfelt with an extra helpings of Scottish charm and wit to boot. The recurring and very timely themes of Two Devils Will Talk are hope, perseverance and living your life to it’s fullest. Opening track “Due West” is an anthemic epic about moving forward and never looking back, while “Seafarers” is a rollicking tale that deals with accepting the fact that you can’t change how the waves roll, only how you roll through them. There’s even a glorious cover of Stan Rogers’ “Northwest Passage” and a spectacular reworking of “Scots Wha Ha'e” (one of the first ever Real McKenzies recordings). “Two Devils Will Talk” sees a resilient, triumphant and defiantly hopeful band at the very top of their game.

You may be asking yourself; how do I get in on what will surely be the party of the century? Well, fear not true believers, The McKenzies' ship will be embarking on massive tours across the USA , Europe and Canada to bring the celebration to a stage near you in 2017. So raise a glass, raise a fist, or better yet, raise a little hell for twenty-five years of The Real McKenzies, and yet another one for many more happy years to come! 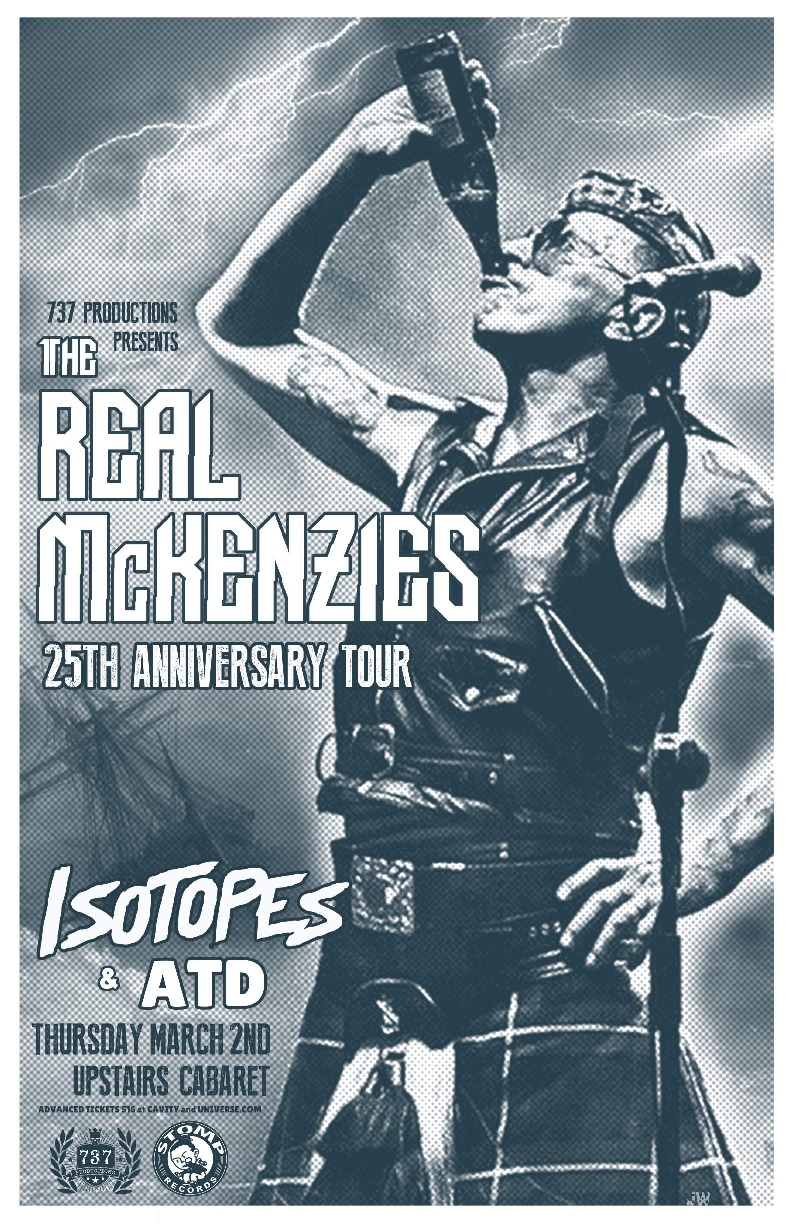