Grit and sensitivity. Percussion and groove. Karen Savoca and Pete Heitzman are ...

Singer/Songwriter from Vancouver BC
Available for Shows/Gigs

Grit and sensitivity. Percussion and groove. Karen Savoca and Pete Heitzman are sinuous as two skaters gliding on ice as they play across soul, r&b, roots and world rhythms, conjuring a communion between audience and stage. Karen Savoca pours her heart into a song the way a great actor throws herself into a role. Her songs draw you into a world of humour and compassion, shared with grace and ease, as though you've been invited to her table for supper. Born in northern NJ, the daughter of a big band singer, Karen’s baby diary reads "20 months, knows 6 songs." At the age of eight she asked for piano lessons, and at thirteen began composing on a guitar she bought with saved birthday money. She attended Syracuse University, where she studied music and elementary education.

Pete Heitzman, a Syracuse native, was playing in clubs at the age of fifteen. He carved out a reputation as an ace guitarist capable of playing many styles, touring across the country with a variety of bands. He met Savoca during a return trip to his home town, invited out by friends to hear a new singer. They jammed the night away, and he joined her group, Karen Savoca & The Mind's Eye, the next day. In that band they forged their unique style, performing original songs to a packed house every Monday just off campus. Those Monday nights became a seven year long tradition where K & P revelled in patrons' enthusiastic dancing and improvised call and response routines. Years later, that chemistry would spark an enchanted scene at the Vancouver Folk Music Festival when 10,000 people - forbidden to dance in front of the stage by festival rules - spontaneously removed their shoes and waved them over their heads.

For this special show Vancouver multi-instrumentalist Shari Ulrich will also perform a solo set on fiddle, mandolin, vocals and who knows what else? Shari has long been a fan of Karen & Pete, and will join them on stage as well (as she has often done in the past. This time she'll also have her own set.)

Hot on the heels of her award-winning solo albums Everywhere I Go and Find Our Way and Bluegrass / Gospel CD The High Bar Gang (with Barney Bentall, Wendy Bird, Colin Nairne, Eric Reed & Angela Harris) - not to mention her many appearances here with the legendary pioneers of roots music in BC, Pied Pumkin - Shari brings her formidable musicality to the stage for this unique concert experience at the Rogue. Don't miss it! 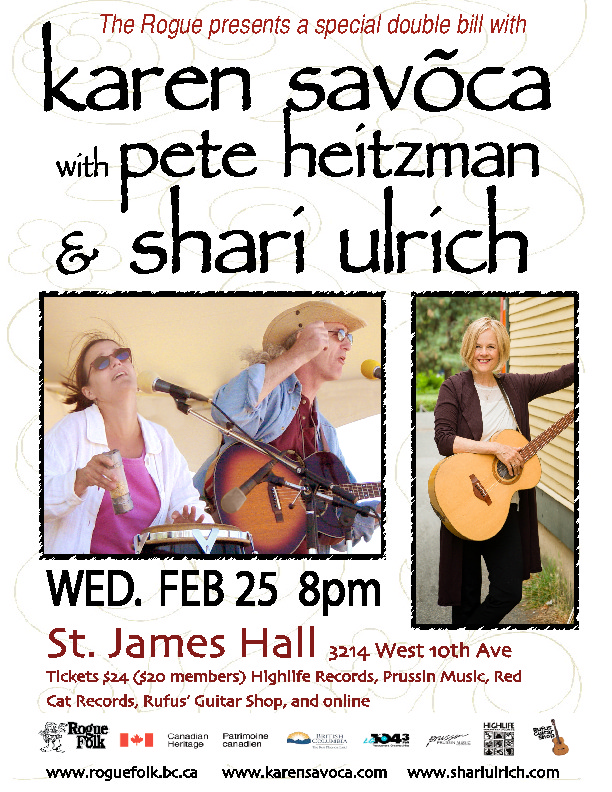